REVIEWED: GAME OF THRONES SEASON 8 EPISODE 4 – “THE LAST OF THE STARKS”.

As the season reaches it’s climax, and after the third episode got a mixed reception due to the nature of it (which I completely understood but chose not to hold against it because I think it isn’t the last time we will see the White Walkers). ‘The Last of the Starks’ focuses on bridging our characters from their victory to the oncoming battle for the throne, bringing characters like Cersei and Euron back into the fold, whilst having other characters travelling south to complete their stories. After the Battle of Winterfell; the many casualties are laid to rest, and a feast in thrown in their honour. Even though the dead have been defeated, the Game of Thrones has once again started, and although Daenerys is praised for her help – it’s clear who is the people’s champion. Of course, Daenerys knows Jon’s secret; a secret that can destroy the very thing she has wanted her entire life. She is clearly threatened by this, and begs Jon not to tell anyone, but Jon being his father’s son tells his sisters leading to Sansa pushing her own agenda and telling Tyrion. Daenerys’ whole council is in shreds as she comes face to face with Cersei in a bid to save the people of King’s Landing.

‘The Last of the Starks’ is a good episode; it’s exactly what I expected it to be and that isn’t bad. It is quite refreshing to have a rather relaxed episode as supposed to the complete mayhem of the last, but also very very annoying as three of the four episodes have been a slow build-up. Leading into what needs to be an amazing final two episodes because the window of opportunity to amaze me is only getting smaller. Episode 4 is very similar to the first two episodes, those two episodes focused on finishing up the character storylines from the last few seasons and focused on setting up the upcoming battle. And ‘The Last of the Starks’ focuses on setting up the final two episodes; Jaimie finally giving into the romance only to leave in the eleventh hour because he knows Cersei needs him, Arya and The Hound heading south, Tyrion and Varys being in doubt as to just who should reign – all while Daenarys is losing not only the person longest by her side (in the last episode), but also losing her dragon and the only other person by her side (all leading to my prediction coming true!!!!). It is an episode that is very character-driven and sets up threads that are vital to the show that we should see come to fruition in the final two episodes. Arya killing Cersei, The Hound fighting the Mountain, Jaimie and Cersei’s storyline, whatever Grey Worm is going to do and arguably the endgame between Jon Snow and Daenarys. 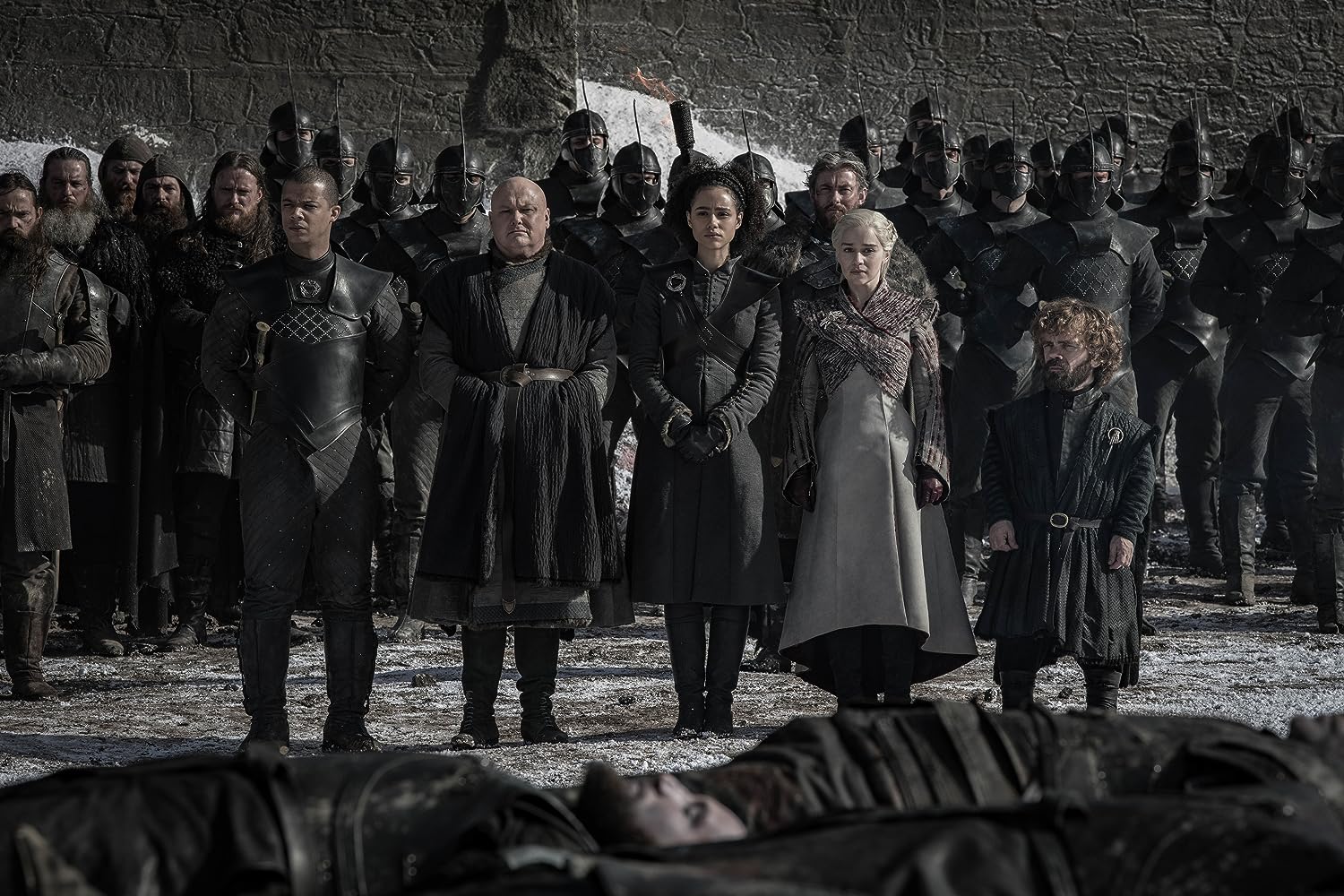 As I said; the episode was rather relaxed (bar the head-chopping) and it had some great scenes. The episode was such a contrast at times; with the episode starting with mourning leading into celebrations due to the war being over. And the episode ended with the beginning of a new war. The biggest scene of the episode is perhaps the last one, with Missandei’s head being chopped off her body, Missandei is a character I really cared about in past seasons and her death was impactfuly plus there has been a lot more love shown this season to Grey Worm, making her death that little bit more impactful. But her death is something that I kind of expected eventually; of course not in that nature but I thought she would die in the last episode. The entire sequence between Tyrion and Cersei was amazing and Missandei’s last words showing just how powerful Daenerys once was. I also really enjoyed the entire celebration section; from Jaimie and Brienne, Tormund (who I hope somehow appears in these next episodes) celebrating and getting his heart-broken, Gendry getting denied by Arya (who I suppose now will definitely not become King and Queen but who would have thought otherwise?) and Bronn showing he really doesn’t care who wins as long as he gets what he wants. I always love interactions between characters – and I really wanted to see a scene between Theon and Arya and that is why the The Hound’s and Sansa’s sweet exchange was a highlight for me; it adds so much to these characters because The Hound carried him leaving her around with him for all this time.

This episode was the best for furthering these characters as we wind towards the end; Sansa once again continues an amazing season as she really showed her dominance in the show, she is showing just how far she has come. Tyrion had another great episode but Varys is a character I predicted would still have a huge role in the show because he was hardly in the first two and I expected him to do such more more. Cersei and Euron are also two that pleasently surprised me; whilst we all now how cutthroat Cersei can be, seeing her turn to Missandei and tell her to say her last words just showed me how much I missed her in the last episode, and Euron taking the battle to the opposition showed his worth – and dare I say; made me like him! 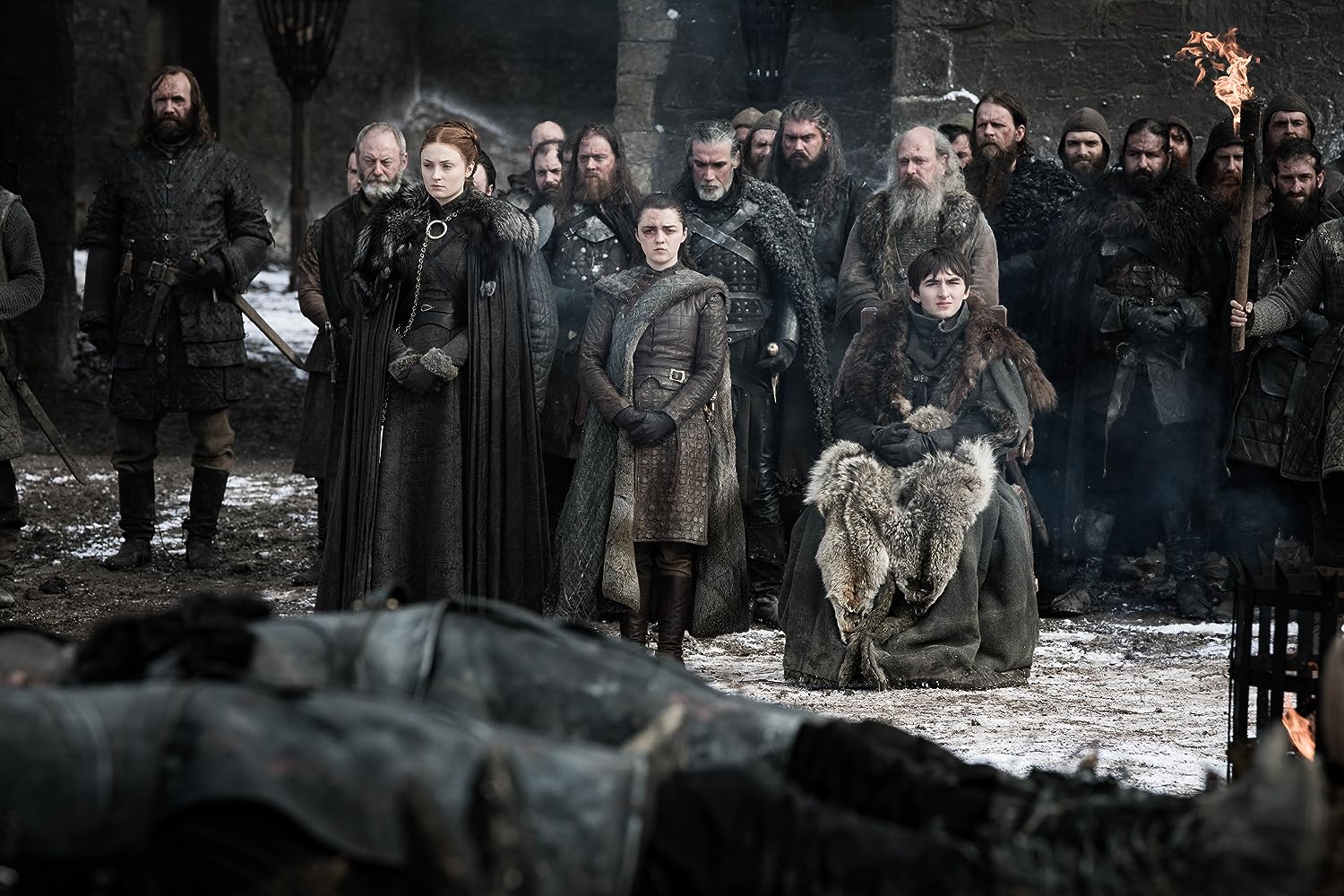 That being said, there were a few things I didn’t like in the episode, I didn’t like how fast the episode progressed; like I said the episode was such a contrast at times. Plus, normally the show perfectly executes character interactions, but for some reason seeing Jon Snow say his goodbyes to Tormund and co; did the opposite of what it intended to do, I really didn’t care because I know this isn’t the last time they will see each other – and damn it Jon pat the damn wolf next time. I, also wasn’t a fan of the coincidences the show had like shooting down the dragon or finding Missandei but I think it best to forgive these because there is no need to nitpick at the episode.

All in all, a good episode that sets everything up for a great final two episodes and a breather for what is to hopefully come. Bring on the next episode

One thought on “REVIEWED: GAME OF THRONES SEASON 8 EPISODE 4 – “THE LAST OF THE STARKS”.”