Well, it has been some time since I last did a review. And; believe it or not – Ant Man and The Wasp is a film I watched in the opening week in the cinema, even though I am doing a review now three months later for most. I will skip a synopsis because…… well it has been three months. To give a rating for the film is one that I have found incredibly hard, I don’t want to be really harsh because it is a good film but I feel like I have to draw a line somewhere. Ant-Man and The Wasp is a good film, but it is basically one we have seen multiple times and I don’t think it is anything special, and the best parts of the film I believe the first did better. So, because of this I have given Ant-Man and the Wasp a B+, or a 7.5/10.

I really did like Ant-Man and the Wasp. Everything I loved from the first film was there, and I was right to “hype it up”, this sequel does right by almost all its characters, and gives us exactly what we loved from the first whilst adding to them. For example, Wasp is really able to shine in the film and although she still kind of has to share the stage with Ant-Man; it never feels like it is being forced but instead just natural. The same can be said for Ant-Man; it isn’t as if he has just been thrown to the side now that Wasp has come in. The continuation of the Civil War story has really allowed this film to work, because it takes it back to how the first film was; grounded. And the fight scenes were all great (I will explain that I think there is a lack of them later). I also really loved the idea that Hank isn’t a good person, this is hinted at through Laurence and Ghost. So, I think the film struck the right chord when it came to its characters even though there where a lot of characters to balance. But, ultimately, the film was great and fun. I still prefer the first, just because I the first has more substance to it, and as I will explain I think this film was missing a monumental villain. 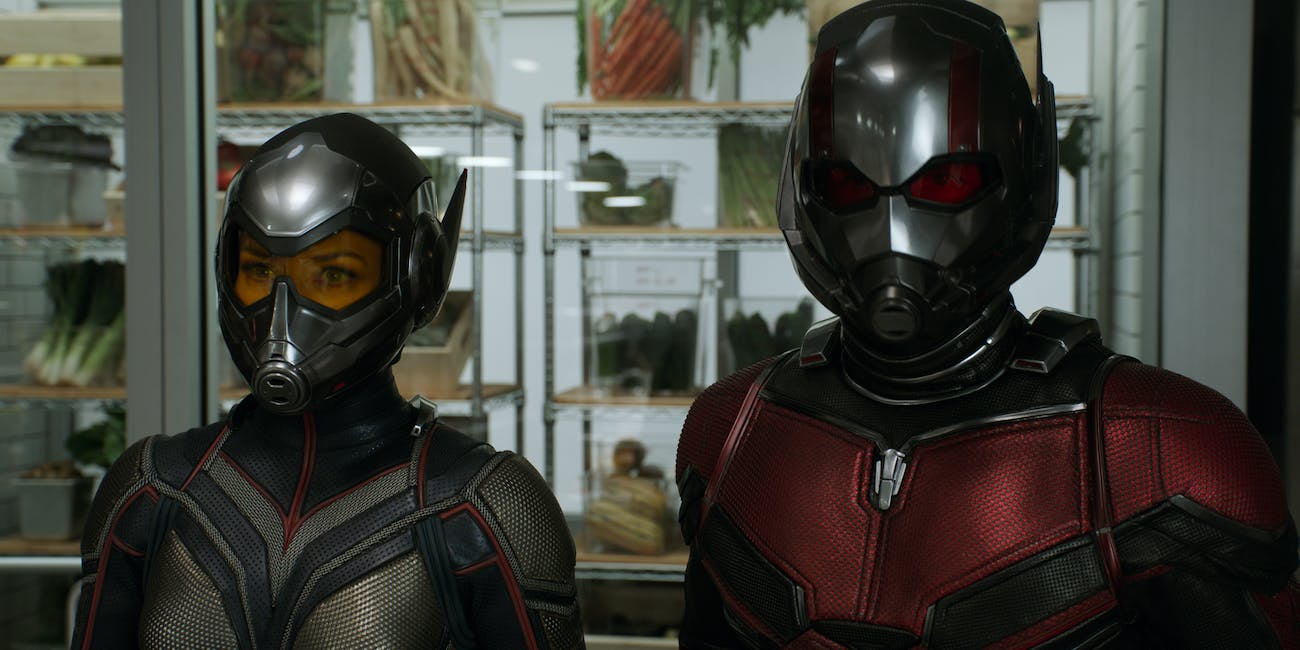 The main problem this film has is its villain. There isn’t one, there seems to be a massive chase for the lab, between the three parties. Ghost, Scott and the Sonny Burch (the buyer and seller). If they were too have given a bigger role to maybe someone like Sonny, or have him in some way be able to sell something that would set up the sequel, I feel as if it would’ve worked better. It is similar to how in the first Ant-Man, the guy got away with the serum, if the same had happened here to set up the third film (maybe it could even be the same buyer) it would have worked better. Instead, what we got was Ghost panicking and refusing to see logic, Bill Foster helping her, Hank Pym being stubborn and then Janet Pym saving the day in the end. Another thing I would’ve liked was a bigger role for my man Laurence Fishburne as Bill Foster, he didn’t have to do anything special but if they set him up in a way where he could have had a bigger role in the third I would’ve liked that.

Another problem that I had with the film was that whilst they did carry through the same things I loved in the first film through to this sequel, I don’t feel as though it hit what I was looking for. And I would’ve liked to have seen more, but maybe it was the right amount because it will ruin it. This, is mainly more Micheal Pena as Luiz, and T.I as Dave, you can’t go wrong by having more of those character in there. And I think there was no third act scene, maybe because I am used to Civil War. But, I expected more action scenes than we got – if you were to go through the trailer you can see them all. But, then as I feel like it has been a decent film, the credits roll and I see a scene that literally makes the film. No, not the ant playing that drums, but instead Scott Lang stuck in the Quantum Realm, and I instantly loved the film again. Which is why I found it so hard to review, but I have to draw the line somewhere, and give Ant Man and The Wasp a 7.5/10.