My very first and (subsequently) last interaction with Philip Pullman’s trilogy of books known as ‘His Dark Materials’ was the 2007 film: ‘The Golden Compass”. I (being eight at the time) did not actually mind the film, but my older sibling very quickly let me know that the film did a grave injustice to the books. 12 years later, a new incarnation of the story premiered: His Dark Materials. Set in an alternative world, we meet a young orphan at Jordan College named Lyra (Dafnee Keen), her uncle Lord Asriel (James McAvoy) was responsible for handing her to ‘The Master’ (Clarke Peters) twelve years ago insisting he must do everything he can to protect her. Lord Asriel returns (a year since Lyra had last seen him) with a huge discovery, threatened by this discovery ‘The Master’ attempts to poison Asriel, but Lyra stops Asriel just as he begins to drink the poisoned drink – not knowing The Master poisoned the drink so Lyra’s fate could be changed. Insisting she will accompany him on his next trip North, Lyra learns of Asriel’s big discovery. After her uncle leaves without her, ‘The Master’ knows he must set Lyra on the path, and introduces her to a mysterious figure in the name of Marisa Coulter (Ruth Wilson)… 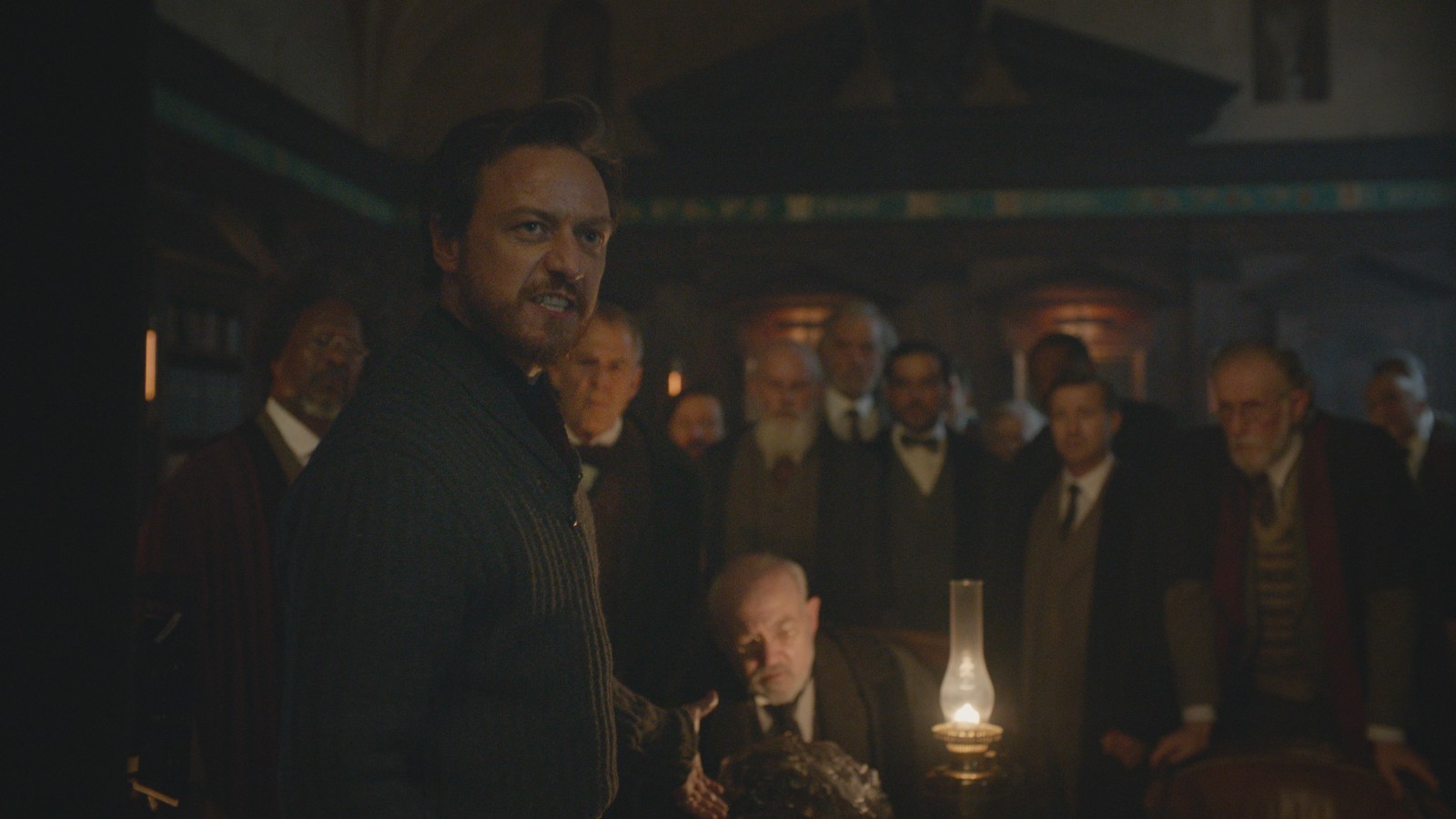 As mentioned I have never had any interaction with this story past the 2007 film: The Golden Compass, meaning I am not exactly sure what I was expecting when I started watching this show. Having never read the book, I have no reference point to be disappointing on or excited about. But, the episode make me very optimistic for the rest of the series, although I wasn’t sure at times (and I’ll explain later), there are a few stories and mysteries to explore which will keep me invested in the show. It was very good in setting up this new alternative world and introducing us to the ‘daemons’. It’s great in opening up the audience’s imagination as to all the possibilities they could have, the CGI is done extremely well, the episode even gets away with ‘less-than’ CGI. Plus, the actual set-up of the show itself, is amazing! It is very much a family mystery, that can be enjoyed by all ages and has a clear idea of where it is going, and that is a result of it being a show that has been made by real fans of the source material, which shines through in every aspect of the episode. A great example of the care taken by the creators is in the shows opening title sequence which no doubt has loads of hidden easter eggs for fans of the books.

I loved the very first scene of the episode it was a great introduction to the episode, and set the tone for the rest of the series, clearly showing that this is a mystery. And that was carried on throughout the rest of the episode with questions like; “who is the girl?” “What has Lord Asriel discovered?”,”Where are the missing children?” and most importantly “What the hell does half the jargon being used in this episode actually mean?”. Anyway, if you have read any of my other work, you will know that I am a big fan of character dynamics and my favourite parts of this episode was when these relationships were in the spotlight. James McAvoy. Ruth Wilson and Dafne Keen are amazing in their scenes and I loved the relationship between then all. Lord Asriel and Lyra’s relationship isn’t your typical child/guardian dynamic, giving so much character depth to Lyra and to Lord Asriel. He is a very selfish, determined man but that is because he is facing these potentially world-changing problems, but as a result he has ignored Lyra, who herself is facing huge obstacles – mainly the lack of an adult in her life. Which then leads Lyra into the arms of the mysterious Marisa Coulter; creating the opportunity for more great character development for the two of them. My main problem with the episode is mainly because I am someone who has never read any of the source material. Meaning for large portions of the episode, I was completely lost, and I can absolutely see how this may disincentivise new viewers from continuing to watch this show. There was so much jargon in the episode, I gave up trying to understand it and just presumed if it was important it would come up again later. I can completely understand how this show may not be for some viewers due to its slow pace, but I presume because there is so much story, for the few episodes the series will just continue to set the scene and explain who and what everything is, and so it may not pick up in pace any time soon.

It seems as though every week, a new show is confusing me. Nevertheless, I am intrigued and am in it for the long run.