THE WALKING DEAD: BEST CHARACTERS THAT ARE STILL ALIVE

The Walking Dead is now into it’s seventh season, and because of the filler we are now being forced to watch I thought to pass time I would make a list of the best characters that are still alive in The Walking Dead, sorry – that means no Glenn or Abraham. My favourite characters aren’t necessarily popular choice, because everyone likes different characters, for example I hated Carl – but my friend used to say that he was the best character because he would do anything that needed to be done. And it wasn’t until his eye got shot off, that I really liked Carl. Oh yeah, SPOILERS……for everything. So I thought, I would try and persuade people just how amazing these characters are.

Michonne is one of the strongest characters on the show, having survived the first two seasons all on her own, and appearing in that iconic scene – where she turned two walkers into her bodyguards. She makes the list because if I had to assemble a team, she would make the list. However we haven’t really seen do anything recently, and that is why she comes in at the bottom – maybe if I did this list during Season 4, she would be much higher. But in the last season, she hasn’t done much (but to be fair nobody has). I will probably do another prediction for The Walking Dead finale – because if you have read my last prediction, you will know I thought that she would die. But she is definitely a killer, and ruthless –  a strong character, and one of the best in the show. 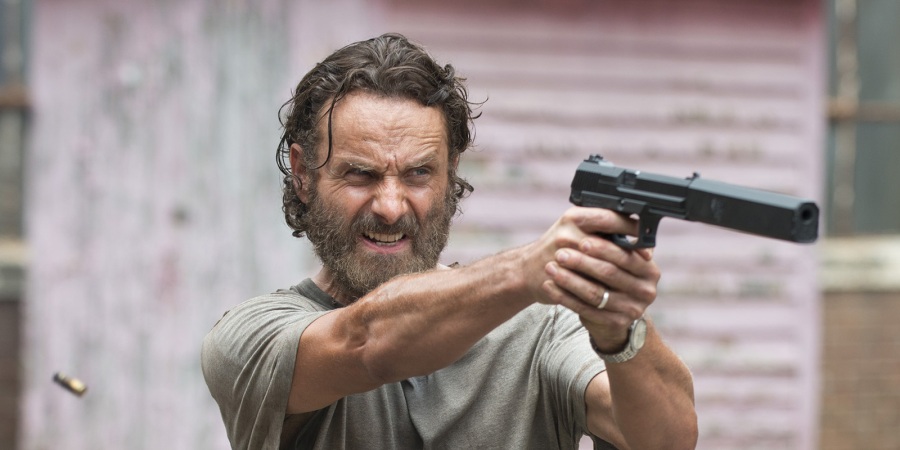 I never used to think Rick was good, until this scene (sorry, it is a really long scene, I want you to remember when Rick went crazy). And then I remembered just how crazy Rick actually is, you don’t mess with him. Just imagine having him as a character in your film, you could do anything you liked, he goes out and kills hundreds of walkers and he kills anyone that threatens him. He has definitely come along way from the start, when he wasn’t sure about killing. The reason he is sixth and not first is (sadly) because of this season. No one wants to see him mope, they want to see him killing, fighting,recruiting, destroying, chopping of people’s limbs, doing what needs to be done. But for the last half of the season all he did was insist Neegan was in power. I understand they wanted to show that Rick was a broken man – but they didn’t need to do it in a way that was basically filler (I will do a listed were I rank the seasons of TWD)

Daryl has always been one of my favourites, I (personally) preferred his brother at the start, but as time has passed you see how he has done what needs to be done. The half season where the group was looking for Beth, one of the only good things that season was Daryl(hell, that season was still better than *that* farm). I love the way he has become Rick’s right hand man, doing what ever is needed, and being one of the few who can get to Rick. And,oh yeah, not forgetting him blowing up everything! Again, a reason he is quite low on the list is because he hasn’t done much recently – of course that scene with him finding Carol was good and his “Easy Street” episode was amazing, but he has received a lot less screen time unfortunately.

The reason Daryl, Rick and Michonne are so low on the list is because people expect them to be the best in the show, I don’t think it would be fun if I just made the same generic list as everyone else.

So far, the choices have been typical and predictable. So here is the first major one that I promise most people will disagree with me on. Now listen, at the beginning I didn’t particularity like him and I really hated him for a bit when Rosita was basically calling him a chicken, saying he needs to learn to fight. That was annoying to me. But when I watched the last episode, I remembered what he did at the beginning, that with what they also did to him last episode reminded me that he is a survivor, he does what needs to be done and right now out of every other person he has an actual story line. Whether he betrayed Rick or not, he is just trying to survive. He is an asset, he can make ammo! That makes him one of the most interesting characters this season – in a season which (let’s face it) has been really boring

Morgan was my favourite character from the pilot, and I waited for his return for so long. If you follow my blog, you would know that Lennie James is one of my favourtie actors thanks to his role in Line of Duty. So, I was waiting for his return for so long, when they teased it after the credits – it got me so exicted. And then, he (single handedly) delievered one of the best episodes in the entire show. The episode where he learns to fight with his stick – no action actually happened, but it was such a joy to watch. We got to understand why he doesn’t kill, and learn where he was for that period where he was missing from the screen. And just in case you think he can’t get any better, he is amazing with his stick, killing zombies left, right and centre

Carol, carol, carol. If I got to pick anyone of these characters to be in my team, it would be Carol. She is absolutely crazy. She went from being a weak little damsel in distress – a character I hated, to blowing up Terminus, saving the group, killing kids because they can’t handle it. I have honestly never liked a character as much as Carol. For example, when they were at Alexandria, and she had to play a victim so that they could trust her. But then the Wolves came in, and she did this. When Carol is doing her thing, killing, manipulating – the show is TV gold. It can’t be a coincidence

It has all been leading into this. Father Gabriel is my first choice. “What!!!” – I hear you ask, just bare with me, and I will tell you exactly how he is the best character in The Walking Dead at the moment. He has gone from being scared and cowardly, to taking out whoever he needs to take out. He is just too good, imagine a mix between Carol and Eugene. Gabriel is out for himself – he is a survivor, he will do what needs to be done to survive (let’s hope I don’t choke on my words and he dies in the next episode). He is depicted as cowardly, but he has come a long way – and he will probably die saving Rick. And, the shadiness – oh the shadiness. He has become a valuable member of the group, quickly digging a grave for Maggie, so they can pretend she is dead – so that she can start to plan to bring Neegan down! No-one told him to do that. Here he is, getting work done and let us not forget the fact that he would do anything for Rick now – defending him. He has changed from being that coward – to being a valuable member of the team

So, there it is. The best characters in The Walking Dead at the moment. I tried to make it a little different, because I didn’t want it to be the same as everyone else.

2 thoughts on “THE WALKING DEAD: BEST CHARACTERS THAT ARE STILL ALIVE”